There are many European cities that remain unforgettable for us for various reasons. We might have warm feelings about places where we were happy or we have seen something that was unique and simply beautiful, places where we couldn’t stop taking pictures or simply wanted to come back again and again. Sometimes you can not explain why you want to come back. Edinburgh is one of the places to be remembered. 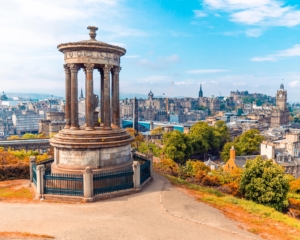 Edinburgh is the capital of Scotland and not surprisingly, one of the most popular places for tourists. What makes it popular is the unique atmosphere, sophisticated charm, and polite people.

The Edinburgh famous castle can not be missed as it stands high above the city on a volcanic hill and dates back to the beginning of the 12th century. Take a steep walk there and enjoy the views. Impressive architectural ensemble was a military fort and a royal palace in times until the beginning of the 17th century when it became the military dwellings. When there, don’t miss the St. Margaret chapel and don’t forget to look at the 2 simple, but beautiful chandeliers. The Crown collection of Jewels is another highlight of the Edinburgh castle that deserves to be visited

The Palace of Holyrood house is an impressive architectural gem of Edinburgh. It is the official residence of the Queen of England. When the Queen is not visiting the Palace is open to the public. It is the place of many historical royal events including royal coronations and marriages.

Walk the Royal Mile, streets that go from Edinburgh Castle to the Palace of Holyrood house and enjoy the beauty of a Scottish city with its inns, cafes, restaurants, shops, churches and townhouses.

To enjoy the spectacular view of the city, climb so called Arthur’s Seat, the peak of the 640-acre Holyrood Park that stands at 820 feet above the city. The terraces of the park are an example of old farming practices of Scotland.

August is probably the best time to visit Edinburgh since it is the time of festivals and it is summer after all. Edinburgh International Festival attracts artists from all over the world to the capital of Scotland. The performances cover a whole spectrum of arts including ballet, opera, classical music and drama. There are also a Fringe Festival of drama and comedy and  International Book Festival where you can meet writers and participate in forums and discussions.

Today city passes are available for most European cities and Edinburgh is not an exception. It allows you to visit 17 attractions for free, avoid lines and includes a map, current deals and valuable tips.

Been to Scotland? Mark it on your very own free travel map on your iOS or Android device.