Georgia Gateway to the Caucasus 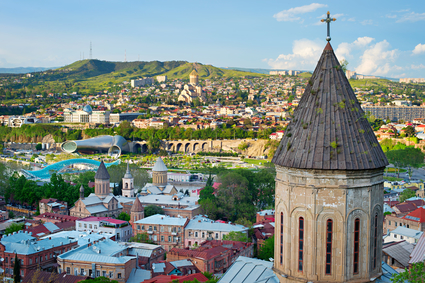 If you asked someone to point out Georgia on a map, you’d probably forgive them for thinking of the US state in the first instance. In truth, the country of Georgia is tucked away between the Caspian and Black Seas and is nestled between Russia, Armenia and Azerbaijan, as well as sharing a small portion of its south border with Turkey. A country of absolutely amazing substance, it is now slowly making its way onto the “must see” lists of travellers, and with its extremely relaxed visa policy, many visitors from various countries can enter Georgia, with work allowed, for up to one year (check this applies to you before travelling).

Georgia is made up of numerous regions, all with their own unique flavour and aesthetics. Tbilisi, the capital, is located in the heart of the country and is a sprawling metropolis nestled into a number of surrounding hills and valleys. Their metro system is busy, but well serviced, clean, efficient and safe and can get you around the large capital in a much shorter time than the local buses or marshrutka services. Each trip on the metro costs 50 tetri, which is the equivalent to around 25 US cents, and so it’s also the most economical option for getting around Tbilisi.

Being a former Soviet country, Georgia still has some sprucing up to do. Out in the countryside it’s not unusual to find very run down and blocky shaped buildings, farms and scraggly looking homes. Despite the suggested appearance though, this gives Georgia a fantastic vibe of charm and travelling curiosity. You never know what you will find out of Tbilisi and in truth, between desert plains, sky high mountains and arid forests, you never know what kind of environment you will find either! Georgia is indeed a country of contrasting vistas from the beaches of the Black Sea, to the highest mountain of Kazbeg, you will be blown away by the countryside.

Mount Kazbeg is located practically on the Russian border in the small town of Stepantsminda (formerly known as Kazbegi), almost directly north of Tbilisi, about three hours by Marshrutka for the low price of 10 Lari (about $5 USD). Private taxis are available but these start at 50 Lari (about $25 USD), but can be a good option for those who have several people to share the cost with, as the price is per car, not per person. All routes to Kazbegi start from the Didube bus and metro station in central Tbilisi and is easily accessible.

Kazbegi is a beautiful place, and with the Gergeti Church perched on a high, but hike-able mountain, you will find views and vistas here to rival many others in the world. Many tourists come to Kazbegi to climb to Gergeti, and the sometimes steep hike is well worth the effort. More seasoned climbers can take advantage of the challenge the further glacier and the summit of mount Kazbeg provides and spend a few days climbing it. Aside from this though, Kazbegi doesn’t offer much else, but it’s worth a few days to spend exploring the town back streets, or as a stop off if you’re heading to Russia, with the town of Vladikavkaz just over the land border, which is reportedly open to travellers now.

Accommodation in Kazbegi is typically via guest house, which are equipped with warm blankets, warm hospitality and warm food. It’s been mentioned that the guesthouses are better value and better equipped with warmer hospitality than the more over priced hotels, and provide you with a much richer experience. Many owners of the guesthouses will even meet you off the Marshrutka in town and take you to their place. The price of guesthouses seems to be relatively similar – 25 Lari per person per night, and around 10-15 Lari for dinners, 5-10 Lari for breakfast. So budget around 50 Lari per person per day at least, but with the relatively low price, you can easily get by on 70-100 Lari if you want to have a few drinks or lunches in the local restaurants or pubs.

Accommodation in Tbilisi and other main cities are typically in hostel, guesthouse or hotel. There has been some development in recent years, particularly in the capital city, into investing in big name hotel chains such as the Radisson, the Marriott and the like to provide higher class rooms to travellers.

Other Georgian stop off points of note include Gori, the birthplace of the infamous Joseph Stalin. It is here that there is a large museum dedicated to the life of Stalin, with visitors sometimes being left confused with the very divided opinion on the man himself – some are proud of their association with him being Georgian, while others are sickened. It therefore is probably wise to keep any opinions of the life and times of Joseph Stalin to yourself while traversing Georgia in case of offending anyone.

With not much else to do aside from the Joseph Stalin museum, you can catch another train out to the beautiful hot spring town of Borjomi and further onto Bakuriani. Borjomi is home to the Borjomi bottled water, a favourite throughout Georgia, and it is also home to hot springs, amazing back alley local restaurants, and some opportunities for climbing and hiking. Bakuriani is a ski resort in the winter, so is perfect for getting a bit of sport in, but in the summer, the views are incredible and it’s still worth a visit to do some hiking or general relaxing with amazing backdrops.

A final note is on the food and drink. Georgian food is simply amazing, with many vegetarian side dishes involving things like shredded beetroot, shredded spinach, walnut sauces, eggplant, pomegranates and many different types of meat. The staple food here is the Khinkali, a dumpling type dish, with many different options for fillings (usually meat mixed with spices), which you will find almost everywhere you go for extremely low prices (great for travelling on a budget!) Other foods available include Russian vareneky – similar dumplings filled with different things, as well as lots of different pastries, kebabs, and breads. Many things that you can get in the west, you can get in Georgia, and as strange as it sounds, the two chain western restaurants that dot the country are KFC and Wendy’s. There is however little to no English on any of the packaging, so you may need to ask for assistance, or having a translator app on your phone would go miles here.

Likewise, the wine and beer in Georgia is simply second to none. With many different brewers and home made wine a common sight, you will have no trouble finding numerous wines with different flavours and sold for almost criminally cheap prices. A Georgian favourite is ChaCha, a wine based moonshine with the strength of vodka, but the taste and flavour of wine – so in short, incredibly dangerously drinkable!

So if you’re planning a foray into this curious, rewarding, diversely beautiful and welcoming country, don’t hesitate. But do brush up on your Russian before you head over, as many of the older generation will be able to help you out in Russian, while some of the younger crowd will know smatterings of English. Don’t expect to find English on every street corner though, and in truth outside Tbilisi it was relatively difficult, but you can get by in broken Georgian, Russian and English with some people! Two useful terms to know in the Georgian language are Garmajoba (hello) and Didi Madloba (thank you very much). So grab your passport and your bags, Georgia won’t stay it’s current unique and inviting self for long!