The Great Barrier Reef in Australia is one of those magical places that every diver knows about and every traveller dreams of visiting. It is the largest coral reef in the world and is located in Queensland, Australia. A place which is known for its beaches, wildlife and awesome Aussies.  After diving, most people rave about the beauty of marine life, its colorful coral but some are a bit too drunk after their adventure to remember it at all. Others can acknowledge the beauty but also call it an adventure. 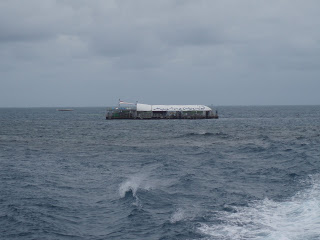 I was very excited to start my journey as I got onto a boat in Cairns, Australia with Reef Magic Cruises. After a quick 90 minute boat ride where half of the boat passengers were experiencing sea sickness, I was feeling even more excited that my Gravol worked and I started to put on my wetsuit as preparation for my first dive! You can only imagine my excitement as it was not only my first time diving (a long time dream of mine) but also diving in the biggest most talked about coral reef in the world.
As we got onto the platform and dove in, I kept remembering to decompose every few minutes and was even allowed to swim on my own at 10 meters below sea level. This was an honor no one else got from my diving group. After 20 minutes, the dive was done and I met some interesting creatures including a few Butterfly fish, Lion fish and some other color fish. The most impressive fish of all was the Maori Wrasse a fish whose name (given by Reef Magic Cruises) I do not remember was notable for its puffy lips and its size which was half of me! The tour operator even took pictures of divers with this famous fish.

After coming from the water, my friend and I decided to continue snorkeling. As we started snorkeling, I had made the decision to go over top of the coral and not around it, so  that I could see smaller creatures such as Clownfish (also known as Nemo). When I uncovered something unique, I wanted to show it to my friend and forgot how close I was to the coral. I turned around and instead of seeing my friend, I hit my foot on the colorful soft looking flower. This instantly turned the water to red (such red that you only see in horror films of Hollywood). A second later, before I felt the pain that came with striking the coral, I realized that the Coral protects me from sharks only within the coral reef. But the area in the open water between the Coral Reef and the platform where the boat was, was not and I had fresh blood in the water. Without hesitation, I swam to the platform without the encounter of any predators.

The boat team was very helpful, they not only treated my wound but also made a plate of lunch (earlier then the rest of the group got) and made funny jokes about the poor coral. (Which I am afraid I killed by touching it, this was more hard breaking than my pain).
The crazy part was that after 20 minutes when the bleeding stopped, I jumped back into the water to enjoy the rest of my day. My bravery was rewarded with a few reef sharks swimming not far away from me. (Reef sharks are generally harmless and not very big, I later found out that the danger is that they attract the bigger more riskier sharks).
I would definitely recommend to be careful when diving/snorkeling for your and the Coral’s sake. And if you do find yourself injured in a place like Australia, you can rest assured that not only is medical help available but you will be left with an awesome story to tell when you return home.
By heels| 2017-05-25T18:11:07+00:00 July 9th, 2013|Oceania|0 Comments