St.  Maarten is a beautiful island located in the Caribbean sea that belongs to the group of Leewards islands and is located between the islands of Anguilla and Saint Barthélemy. From the year of 1648 by Treaty of Concordia there have been two European countries that coexist in peace and harmony on that land. Northern part is French representing 60% of the island’s territory and called Saint Martin, and Southern part is Dutch having 40% of the island’s territory and sounds Dutch, Sint Maarten. It is a reflection of the colonial past. But today, different names, French and Dutch languages, different laws and schools but no borders, no customs. Even the island’s auto license plate holds the amiable logo: “The friendly island”. It is not just words. The multicultural population is extremely friendly, warm, speak multiple languages and is united in one thing – they love their island. It is not surprising to see people who once discovered the place coming back for white sand beaches, sunny weather, secluded coves, hospitable people. 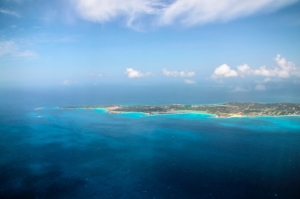 The French side is famous for its gourmet, epicurean food and the Dutch side runs multiple casinos. In the early evening you can see the cars going to the French side for gastronomic delights to come back later to the Dutch side for flamboyant nightlife. There are many beautiful bays on the island that are resorts of different value.

There are two bays on the Dutch side divided by a small peninsula that are called simple: Great Bay and Little Bay. Great Bay is the harbour to Cruise ships that dock in Philipsburg, a Dutch capital of the island famous for its duty free shopping, endless shops selling liquor and jewelry.

Little Bay lies to the south of the Great Bay. It is a stretch of white sand and turquoise water and home to Divi Resort. The beach waters are calm and very clear. High underwater visibility makes it a perfect snorkelling site. Today you can go there by boat and have an underwater walk on a sea track. The underwater track is a display of not only natural reefs but also man created reefs where you can see a helicopter, a small plane, a submarine, 2 antique cannons which all are now home to marine flora and fauna. If you like snorkelling you won’t be disappointed. There are many Caribbean sea habitants to be spotted including corals, spotted moray eel, parrot fish, squid, angel fish, clown fish, snapper, sea urchins to name a few.

On the hilltop of the Little Bay there is a historical Fort Amsterdam that can be reached on foot from the Divi Resort. Remains of 17th century Fort with cannons and ruins of the fort buildings can be seen there. The views from the hilltop are breathtaking. Being on top you can enjoy the views of Phillipsburg, huge cruise ships coming to and from the harbour, boundless Caribbean sea waters that change its color during the day showing different shades of blue and green.

Also the hilltop is the nesting place for pelicans. One of the rocky slopes houses nests of hundreds of these beautiful sea birds. If you visit at the end of March and beginning of April you can be lucky to see white pelican chicks with parents in the nests. The nests are pretty close to the Fort site and can be seen clearly without any optical devices. Also the hilltop is habitation to big iguanas and various plants that are natural to the Caribbean region.

If you travel to St. Maarten don’t miss Little Bay. Enjoy its beautiful scenery, wildlife, marine life, history and, of course, the soft, white sand beach and its calm, warm, turquoise water. If you have been to St. Maarten or want to visit in the future, use your personalized travel map app, Visited which can be found on iOS or Android.