The country absent of travellers (Malaysia)

Malaysia is surprisingly often absent from many travellers itineraries who are travelling around South East Asia.

This could be because it’s a little more expensive than hot destinations such as Thailand and Vietnam, or perhaps it’s the fact that alcohol is heavily taxed and so Malaysia is definitely not the place to go to for raucous full-moon parties.

But this is perhaps what makes Malaysia appealing to those who just aren’t into such parties.

Malaysia is essentially broken into 3 parts: The mainland, which stretches from the Thai border down to the border of Singapore on the very southern most tip of the peninsular. But also, the two provinces on the island of Borneo, Sabah and Sarawak, known collectively as Malaysian Borneo.

The capital of Kuala Lumpur is one of the most accessible capital cities in the world, and is a major transport hub. This is thanks to it being the home city of the budget airline, Air Asia. From Kuala Lumpur it flies dozens of routes across the region and further afield such as Australia and even India and Iran.
Alternatively, those travelling from Thailand often opt to go to Kuala Lumpur by sleeper train, which is comfortable and good value for money. However the train only goes as far as Butterworth, near the island of Penang. There you have to change to another railway by bus to continue on to Kuala Lumpur.

Visas are thankfully free and give you a generous 90 days to explore the country. However, note when you fly to Malaysian Borneo you will get a separate free 90 day visa, as these provinces are autonomous regions.

To get to Sabah or Sarawak on Borneo, Air Asia flights leave from all major cities in Malaysia. They are almost always under $20 each way if you book a little bit in advance.

So, what is there to do in Malaysia?

Kuala Lumpur is a fairly good introduction to just how multi-cultural this nation is: Hindu temples and Indian restaurants showcase the 20% ethnic Indian population, and likewise, the Chinatown area showcases the 20% ethnic Chinese culture. The rest of the population is Muslim. Needless to say Malaysia is very diverse.
Kuala Lumpur is also home to the Petronas Towers, which are some of the tallest buildings in the world. However, queues for this attraction are always very long, so if you want to visit and enjoy the views from the top it’s best to arrive early in the morning to beat the rush.

Getting around Kuala Lumpur is difficult by road as traffic is gridlocked especially around rush hours, but thankfully it has a cheap and efficient monorail and metro system. The monorail can take you to most of the highlights in Kuala Lumpur. 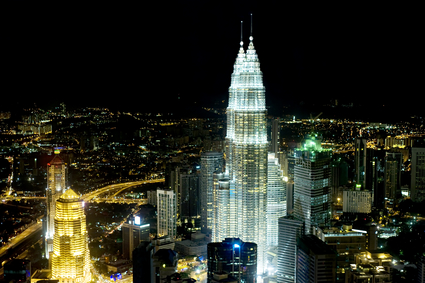 Kuala Lumpur from KL Tower in the night. Malaysia

Outside of the capital on the mainland are the Cameron Highlands, a former British hill station that often has British weather to match! This is a relief from the tropical heat of the lowlands. Here you can visit tea plantations, strawberry farms or book day tours to go into one of the oldest rainforests in the world. Or you can hike one of the many trails through cloud forests.

Further north, towards the border with Thailand is the island of Penang, connected to the mainland by one of the longest bridges in the world. Penang’s capital is Georgetown and is a UNESCO world heritage site. It showcases Chinese temples, has a “Little Indian” district and is home to colonial architecture.

On the East Coast, the Perhentian Islands offer a real slice of paradise. They offer excellent coral reefs suitable for snorkelling or diving, white sand beaches, and have thankfully not yet succumbed to mass tourism.

Switching attention to Sabah, part of Malaysian Borneo, Kota Kinabalu is the provincial capital and gateway to this part of the island. While the city is nothing special in itself, it is the gateway to the fantastic Kinabalu National Park, where you take rainforest safaris, trips to the Orang-utan sanctuary, or climb the mighty Mount Kinabalu, standing at 4095 metres, making it one of the largest mountains in south east asia.

Sarawak, on the other side of Borneo in the west offers a culture that is very different to mainland Malaysia. Many people here are Christian and the rest Chinese, all other religions are firmly in the minority. Alcohol here is very cheap compared to the mainland and Sabah, which to some is a relief!

Every year Sarawak is home to the Rainforest World Music Festival which has hundreds of artists performing from all over the world.
Gunung Mulu National Park to the East of Sarawak is infamous for having one of the worlds largest cave systems. It is tough to get to, but well worth it if you have the time and money to do so.

So, in conclusion, Malaysia is more developed and easier to travel in than its neighbours to the north. The slightly higher price tag is worth it for the absence of scams, hassle and general corruption of other Asian countries. It’s infrastructure is also vastly superior to countries like Thailand. Visas are free on arrival and there is so much to do here that will please anyone.