Top 10 Films for the Traveller 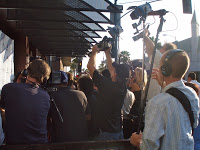 I have always found inspiration to travel from magazines, books, fellow travelers and of course movies. I usually try to watch movies from the country that I am planning to visit to learn about the culture and possibly see future sights that I plan to visit. Below are my top movies for those that love to travel!

1) The Motorcycle Diaries (2004)– It is a must watch movie for anyone who has ever wanted to take a long road trip. The movie is about Che Guevara and his friend, taking a long trip from Buenos Aires all the way up to Venezuela before he would go to his true calling. Most of the movie is focused on exploring the beautiful country sides of the continent and the people that live there.

2) Under the Tuscan Sun (2003) – The movie which was written by a travel writer Frances Mayes in a some what self memoir manner, is a story about a divorced woman who finds herself in Tuscany. It is the perfect romantic comedy to watch when in need of some romance, Italy and of course travel adventures. Who has not felt like packing up their life and moving to a new location?

3) The Way (2012) – A father played by Martin Sheen, goes to Spain to recover his estrange son’s body, and finds himself doing the famous pilgrimage of El Camino De Santiago – a journey his son never got to finish. In the process, he finds not only himself but also finally understands his son’s passion for travel. This is a must see film for anyone who is planning to do a pilgrimage/hike to Santiago but also for anyone who had to deal with parents who did not approve of the traveller’s lifestyle.

4) The Bucket List (2007) – It was a blockbuster movie starring Jack Nicholson & Morgan Freeman who meet in a hospital and both decide to make a list of things they want to do before the end of their lives. The list includes an around the world vacation which includes climbing the Pyramids (although it is not possible to do so), lion safari in Africa, skydiving and eating at the world’s best places. It is one of the most inspiring movies of all time!

5) Eat, Pray, Love (2010) – This is an obvious one, written by another travel writer Liz Gibert and played by Julia Roberts. After she realizes that she is unhappy with her life, she decides to go on a one year journey to discover herself by eating in Italy, Praying in India and Loving in Bali. All countries starting with “I”. Ironically, I have met travellers who did not enjoy this movie as they found it to be egoistic. However, having lived in Italy as a foreigner, I can say that the movie nailed it, and I would watch it if only for the Italian part only.

6) Roman Holidays (1953) – It is a classic romantic comedy staring Gregory Peck and Audrey Hepburn about a woman finding love in the ancient city of Rome with a fellow American. What could be a sweeter love story then two Americans meeting in Europe?! Be warned that this movie is a bit nostalgic and watching it after being to Rome, will make you want to visit it again sooner rather than later!

7) The Holiday (2006) – Great Christmas movie with an all star cast. Takes place when an LA business woman swaps her house with a British writer during the holiday season. While being more of a Romantic Comedy than a travel story, it is a great inspiration to anyone who has ever wanted to swap houses or see what their life would be like on another continent.

8) Midnight in Paris (2011) – A Woody Allen film about a writer who takes a trip to Paris with his fiancé only to find himself travelling back in time to the 1920s Paris in midnight. This movie is not only nostalgic but showcases the beauty, romance and culture of Paris.

9) European Vacation & Vegas Vacation (1980s) – A series of films staring Chavy Chase, as he stars as a father to two children and a wife and their adventures of travelling as a family to Europe and later on in Vegas Vacation to Vegas. It is not only one of the funniest films of the 1980s, but it is also a very true if not exaggerated depiction of what it is like to travel with your parents. A must see for anyone who is dreading their family vacation or for the parents who go with their teenage kids abroad.

10) Couples Retreat (2009) – A movie staring Vince Vaughn is about four couples as they embark on a journey to the French Polynesia (Bora Bora) to a Tropical island. While being silly and funny, it is beautifully shot and is a film anyone who has been to an “All Inclusive” destination can relate to.

What are your favourite movies that are related to travel?