Toggle SlidingBar Area
Home/Europe/Ukraine, the alternative to Russia
Previous Next

Ukraine, the alternative to Russia

Ukraine is a large country on the very eastern border with Europe, bordering Poland to the west and Romania and the Black Sea to the south and of course, Russia to the east. It also shares borders with Belarus, Slovakia and Hungary. Formerly a part of the Soviet Union until the fall of the Union in 1991, Ukraine has enjoyed a storied and interesting history, including a period of time in its very early history as a stopping off point for Genghis Khan and his cronies from Mongolia. 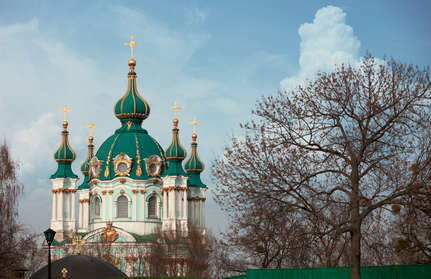 A large exodus in the early part of the 20th century saw huge numbers of Ukrainian migrants move from the fields of the homeland to the fields of North America, most prominently, the prairies of Saskatchewan and Alberta in Canada where it’s not uncommon to come across entire towns that consists mainly of those with Ukrainian backgrounds who can easily trace their families back to parts of Ukraine. Inevitably so, many of the cultural aspects of the old country remain instilled in these parts of Canada, and its possible to even visit a Ukrainian Cultural Village in Alberta.

Ukraine is home to a number of extremely rich, cultural points including the food, dance, language, traditional clothing and other pieces of interest. The religion throughout the country is primarily Ukrainian Orthodox and the people hold it very dear to their heart. There are aspects of a form of paganism that can still be picked up in the tradition of colouring and drawing on the Easter eggs (Pysanky), with some of the symbolism featured believed to bring about good harvests and good relationships with the land in the coming summer. Symbols like wheat, the Sun, stars and the like are clear representations that feature prominently on the eggs – particularly the wheat.

If you’re interested in museums, dancing and art, Ukraine is the place for it. In Kyiv you can find the home turned-museum of Ukraine’s favourite son, Taras Shevchenko, an author and poet who rose to fame for some of his controversial poetry and dissident activism in Imperial Russia. Ukrainian dancing can be found throughout the country, with colourful costumes and flying men (the men do dance moves that seemingly make them fly!), and live music can be found in side streets, either as friendly buskers or in seemingly quiet local pubs where the instruments come out and the men and women join along in song.

Ukrainian food is simply put – delicious and varied. From fish dishes to the dumplings (pyrohy) stuffed with all sorts of fillings, cabbage rolls and soups such as Borscht, the food is absolutely fantastic. A mainstay ingredient in many Ukrainian dishes is both garlic and dill, meaning that the food is flavourful and fragrant (and makes your home smell warm and welcoming while cooking it!)

Ukrainians are avid vodka drinkers and there are a number of great vodka producers in the country, including Nemiroff and Xhoritsia, two that are the most well known and high quality (but low price!). Beer (pivo) is also a favourite and there are now a number of craft breweries featuring beers brewed in house on offer as well. With the menus for beer and vodkas in many places, any visitor can see that drinking is a huge part of Ukrainian culture as well!

The most well-known city in Ukraine is undoubtedly Kyiv (sometimes spelled Kiev). A beautiful city with a healthy mixture of Baroque architecture and old Orthodox church domes, this city is built on the large river Dniper which played a large role in the history of the city, helping it trade with nearby neighbours. Today Kyiv is a bustling metropolis that caters well to the visitor, with a very well-equipped metro and bus system that touches many parts of the city. The centre around Independence Square is a hot spot to take in some beautiful buildings and has a number of great restaurants, and the nearby district of Podil is great to catch a relaxed beer at one of its back street pubs.

L’viv to the west is the gateway to Europe and is only a few hours drive to the Polish border. Considered by many to be “Prague fifteen years ago”, L’viv is a beautiful and well-equipped city with all the comforts that travellers look for. A definite “up and comer”, this city is a favourite amongst visitors, sometimes even more so than Kyiv.

Chornobyl to the north of Kyiv is one of the most well-known locations in the world and unfortunately for all the wrong reasons. The 1986 nuclear disaster that occurred here left many people dead within a short time and many more homeless from not just Pripyat (the official town for the workers of the Chornobyl power plant), but also the surrounding areas. These days you can find a tour provider (mainly in Kyiv) to head to the area yourself to have a look and wander the town and area which is a must do for many. Tours can range in length and price, and you need to book well in advance as they have to carry out background checks, so make sure you look into this well in advance of your trip – this is not a tour you can “just show up for on the day”.

The Carpathian mountains are a beautiful mountain region in the south of the country and they extend south into Romania. Towns and villages in the area feature fortresses and castles that are beautifully built and reminiscent of fairytale castles with high towers and very high, pointed roofs with flags atop them. The style of the castles here is very similar to those in neighbouring Romania.

Other parts of Ukraine

Unfortunately due to various uprisings in the eastern parts of the country and in Crimea it’s inadvisable to traverse much further east than Kyiv or Dnpopetrovsk in the south east, and not to venture into Crimea unless you have a good reason. The border crossings in these regions (Luhansk and Donetsk) will expect foreigners to have a very good reason  to be coming into the area given the fighting that has been going on for several years. While foreigners are unlikely to find themselves caught up in anything nasty, it’s probably better to stick with the north west, south west, Kyiv and L’viv areas.

Overall Ukraine is a varied and interesting country with many welcoming regions, beautiful villages, towns and cities. With vast swathes of golden fields and bright blue open skies it’s easy to see why the flag of the country is royal blue against a yellow field. Come to Ukraine if you’re looking for a warm welcome from the locals and delicious food, fantastic music and intriguing, history laden museums.